Minutes from Meeting with Jay Pryor

Caveat: I’m sure I’ve missed some points. But you should get the gist of the conversation.

A - Showed him the Strava print out. 82 registered Strava users have ridden that segment 2,829 times since circa 2011.

B – Gave story of the original See & Be Seen Dunwoody Cycling route that was on this segment. After a couple of weeks, riders had it changed, because it’s not bike friendly (no shoulders, narrow lanes, busy, etc.). Said organized group rides all try to minimize our time on any busy roads, so we’re not that readily visible.

C – Said we make up our own Recreational routes to avoid traffic and for exercise. A completely different purpose from getting from point A to B in a utilitarian fashion to go shopping, as a commuter, etc.

D – Told him that GDOT put bike lanes last year on Ponce de Leon in Atlanta, with around 33,000 cars per day.  – Jay asked if there were bicycles on it, I said yes. I should have shown him a video of that, too.

This video was taken during evening rush hour on Monday, August 4th -- just a few days ago.

E – Played him my video of me riding on Chamblee-Dunwoody & how “uncomfortable” / “dangerous” it is. Said of course people like my wife would never choose to ride on this road in its current condition.

The video clearly shows cars crossing the yellow center line & Roswell PD in the comments section clearly states it’s permissible to do such. I gave examples of a Post truck. Delivery Truck, UPS. Or in rural areas, farm tractors.


G – Described to him how nice Mt. Vernon is west of Ashford-Dunwoody with the new Bike Lanes. Before, cars were having to wait for cyclists. And we cyclists had to “squeeze” in to ride, often getting “buzzed”. Now we both have our own place, which keeps traffic moving smoothly and it’s safer.

H – Asked him to think of roads as:

I  - Jay brought up Columns Drive and when he’s driving his car, he’s so “fearful” of hitting bicyclists that at times he won’t even try to pass. I replied that I do not like to ride on Columns. I said that because there’s NO SIDEWALKS, it FORCES pedestrians & runners out onto the street.

ISSUE #2 – Jay (paraphrasing) indicated that his perception is that bicycling is mostly for optional recreation / asked if there actually were people out there going from A to B, etc. 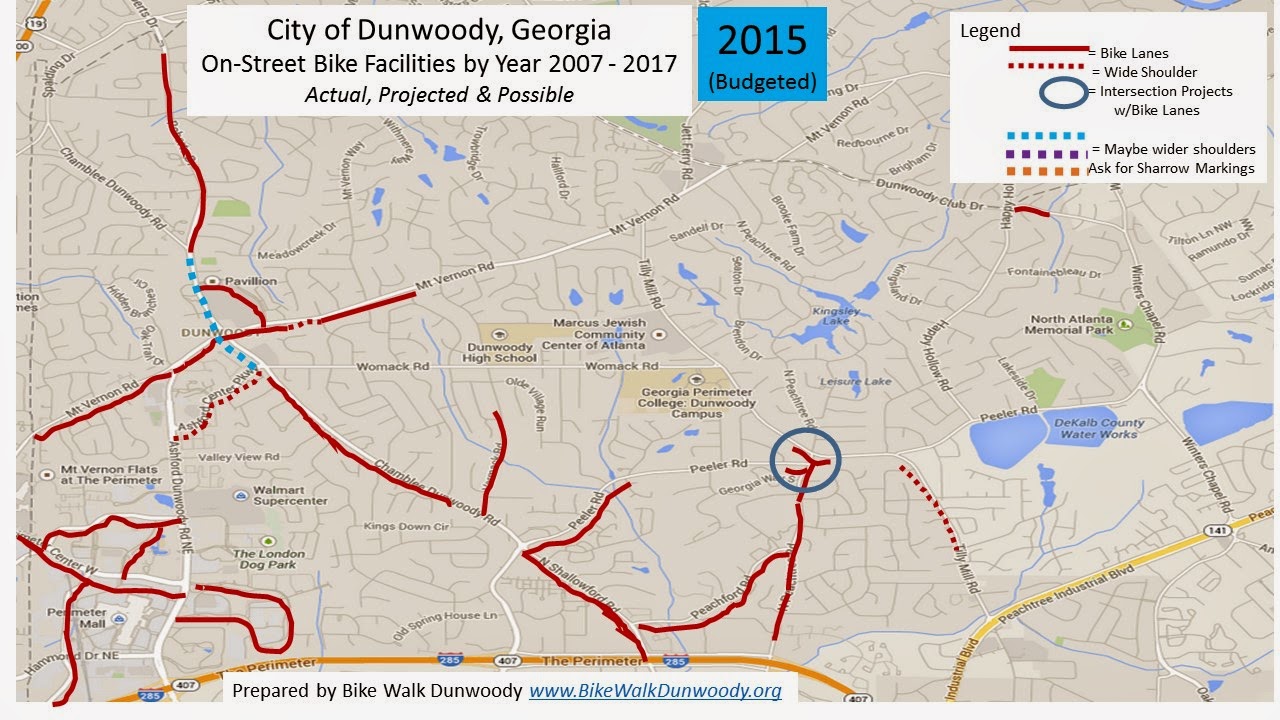 and how it’ll be a connected network. Once it’s connected, there will be more & more people using them.

B – 40% of all trips in the US are 4 miles or less. That’s too easy to ride a bike. Discussed Jett Ferry / Williamsburg to Dunwoody Village is two miles. & Dunwoody Village to Georgetown is also only 2 miles. Not only will this open it up for weekend casual recreational riders wanting to get some basic exercise, it will allow people to ride their bikes to Starbucks, meet friends for lunch, short errands, etc.

C – Showed him the infographic of the space for 60 people in cars _vs_ bikes. 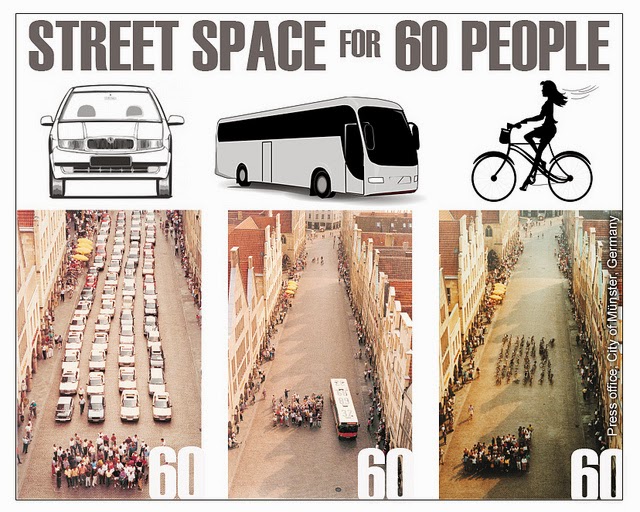 As an example, I discussed the vast numbers of parents driving their kids to school. Said if we could have SAFE Routes to School (mentioned Decatur), then a few percentage of those parents just might let their kids walk or ride their bike to school, REDUCING motor vehicle congestion in the morning.

D – Roberts Drive Bike Lanes (2011)-- Said once the bike lanes were installed, Austin Elementary had to get a THIRD bike rack, with all of the kids riding their bikes to school. 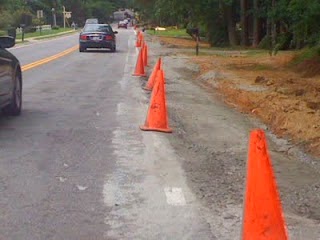 Told the city WIDENED a couple hundred feet on Roberts (for about $50k) on a particular segment to get the extra width to have the Bike Lanes. Said it was 100% within the Public Right of Way. Said that this year (2014) just now the Council has approved installing sidewalks on the west side of Roberts along the same segment, making it a “Complete Street”. 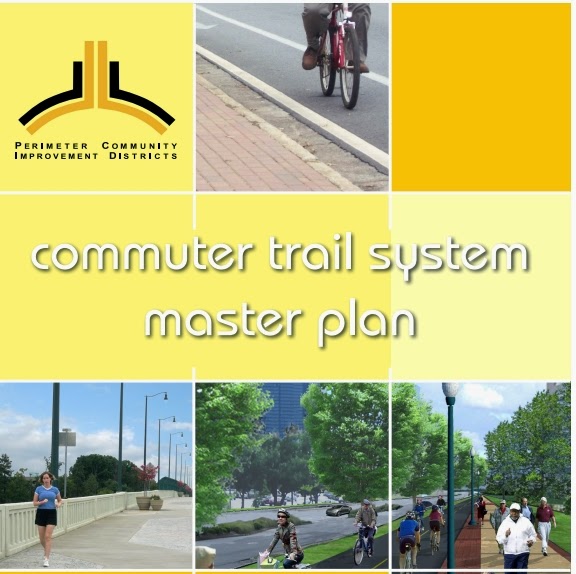 They are building out a network within the business district of trails to connect the office buildings to the two MARTA stations, shops, restaurants and offices.

Response: I said I hadn’t heard that at all. Jay said he got this information from our Public Works Director, Michael Smith

[Note: I followed up with Michael & he said the project boundaries did NOT require any land acquisition. Rather, Construction Easements are being sought with adjacent property owners.]

ISSUE #4 – City will NOT install the sidewalks as part of the current “Complete Streets” project on Chamblee- Dunwoody if it’s over budget. The city will (paraphrasing) ‘First & foremost” widen the road by the required 8 feet (true) and install Bike Lanes. Then, if there’s enough budgeted money left over the city would install the sidewalks.

Response: I said I hadn’t heard that at all. Jay said he got this information from our Public Works Director,
Michael Smith

[Note: I followed up with Michael & he said the project bid includes BOTH the road widening for Bike Lanes AND Sidewalks. Need to see what amount the returned bids come in at. ***IF*** they were over budget then the sidewalks can be installed at a later date. It’s not an “either or”. IMHO, it could be similar to Roberts Drive – Bike Lanes in 2011, Sidewalks in 2014]

I just thanked Jay for his time. It was cordial, casual and very open. I didn’t ask him to change his mind. I just asked him to take a look at the information I was providing and to consider it.

I provided Jay with hard copies of the following: 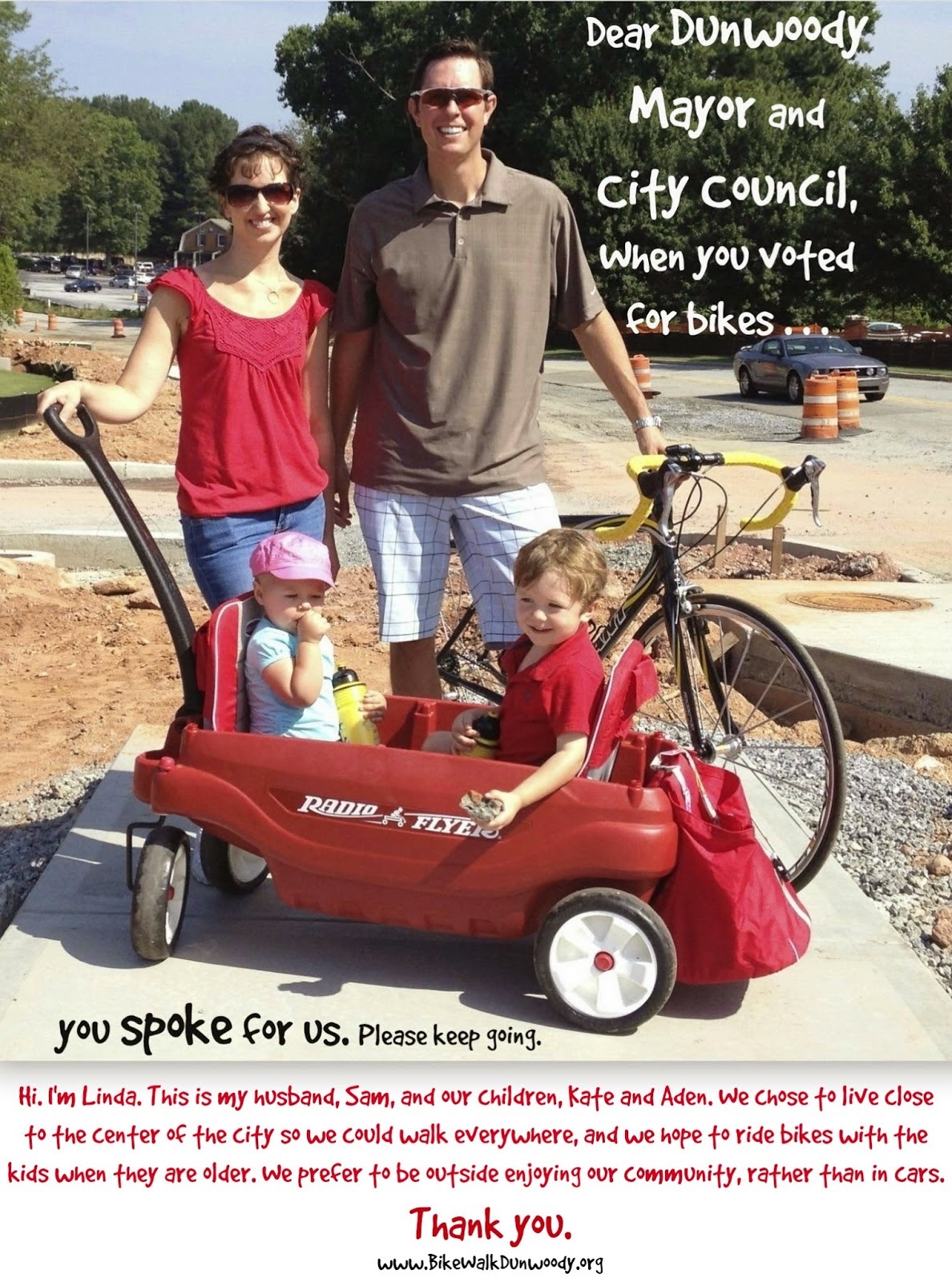 The photo was taken on the under construction Dunwoody Village Parkway. (I said we had handed out over 1,000 of these in the 4th of July Parade.)

6-page color print out of 12 of the other Bike Walk Dunwoody PSA photos (2 photos per page). 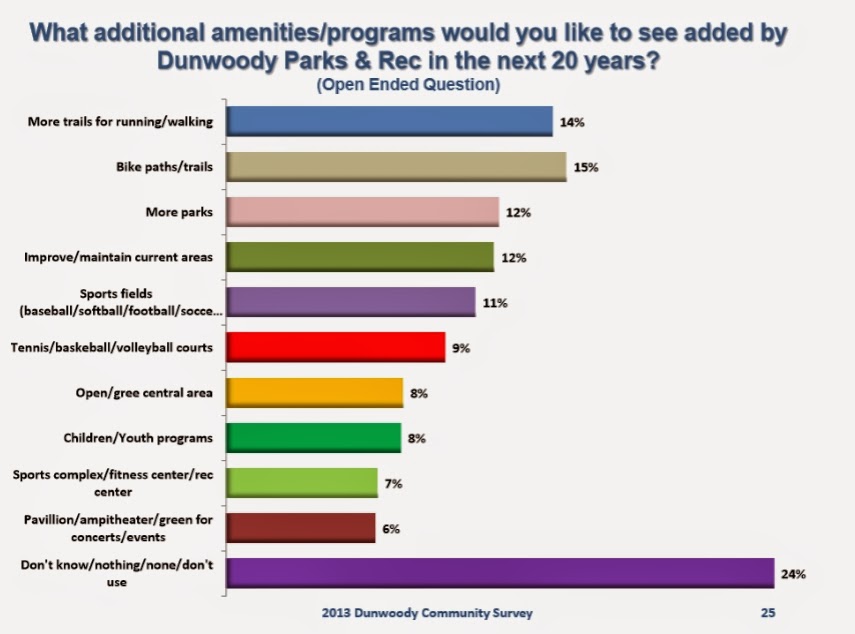 Extract from 2011 UGA / Georgia Bikes Survey on Citizen Input on Bicycling Issues. Physically highlighted the statement:
·         “81% of respondents either strongly agreed (37.0%) or agreed (43.9%) that they would ride a bicycle more frequently if their community had better bicycle facilities such as bike lanes or multi-use paths.

[Joe point: Build it & they will come]

1-page extract from page 2 of the May 2014 Budget Report showing the Pie Chart of City Expenditures. Used this just to put things in perspective of where we are spending our money. Jay said it’s a shame we don’t have active Parks & Recreation system such as in Roswell.

Infographic of the space for 60 people in cars _vs_ bikes

Provided him a hard copy of the following original & unedited 2-page “Vision” document. Told him that I used this doc in 2009 & met with each Councilmember, the Mayor and other city leaders to discuss. (I did not go over the items in the doc.)

A Bicycle and Pedestrian Friendly Vision for the City of Dunwoody
Prepared by the Dunwoody Bicycle Taskforce
June 24, 2009
www.BikeDunwoody.org (coming soon)

Transportation Planning should be thought of as a
Throughput of People, rather than exclusively motorized vehicles
Dunwoody is a “Keystone” City
Regional Connectivity
Destination for live, work and play
We are an active, engaged and healthy community

Prepare a separate, dedicated Bicycle Master Plan for the City

“CHICAGO’S COMPLETE STREETS POLICY
The safety and convenience of all users of the transportation system including pedestrians, bicyclists, transit users, freight, and motor vehicle drivers shall be accommodated and balanced in all types of transportation and development projects and through all phases of a project so that even the most vulnerable – children, elderly, and persons with disabilities – can travel safely within the public right of way.” (Alliance for Biking & Walking)

·         Walking and Bicycling to school as a safe and viable alternative

Appoint a City Staff Member as the Bike/Ped Coordinator