Letter to Dunwoody Mayor & Council: Announce we are a Welcoming City

Yesterday in the news, the Dunwoody assistant city attorney has been put on paid administrative leave following allegations he made derogatory comments on Facebook about women and Muslims, according to a city statement. 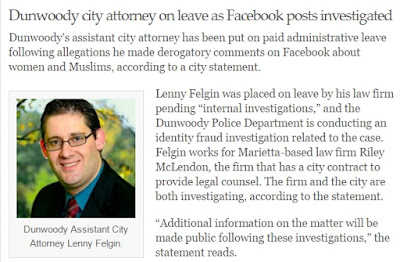 
Today, I sent our Mayor & Council the following letter, asking for a proactive and welcoming response.

I personally know, trust and have the greatest faith and confidence in all of you as our elected & appointed city leaders. I know you all have the highest ethical & moral values. I recognize and greatly appreciate that you are taking this effort of due diligence most seriously in this matter. You could have taken a different path. But you didn't. And it is greatly and sincerely appreciated.

In that light of that and on a proactive note, could we please get a public statement by our mayor

Denouncing any racist remarks or behavior of any staff or city official, reaffirming that Dunwoody supports and welcomes people of all faiths, immigrants, ethnicity and backgrounds to our city?

Enforcing that our police will not racially profile anyone and treat all citizens alike with the same respect that we all have for one another?

And for those employees, contractors or persons doing business of & by the City of Dunwoody, any such behavior will be swiftly dealt with leading up to and including termination?

This statement does not need to mention or reference this ongoing investigation.

As you know, Dunwoody voted for Hillary. The past 12 days have seen great divisiveness and angst in this country and our region that hasn’t been seen in a generation. We are a divided and polarized nation. Instead of coming together after the election, we growing apart. Facts matter and truths are indisputable. People who don’t like what they have seen the past 12 days are mobilizing, organizing, becoming informed and taking actions. Right here in Dunwoody, too. At the local level, we should not be a divided Dunwoody. A short and direct statement by our hometown mayor would go far in the eyes of the greater public.