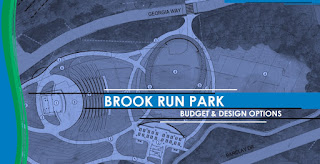 As my day job took precedence, I sent the following email with my overarching feedback to our mayor, council and key staff:

All in one (Copy/paste)

My day job got in the way and I can't make this 4 pm public meeting. Here’s some ideas I would like you all to seriously discuss and consider:

1) No new parking spaces in our parks or new motor vehicle access points. Instead, put the money into building out a greater connected multi-use trailway network to access our parks. E.g.: Continue the trail from Brook Run eastward along Tilly Mill to Peeler (connecting with Windward Hollow park) to Winters Chapel.

2) Only spend the $$ we got from DeKalb (About $3.5M is left I've been told??). Anything more, float a well-rounded infrastructure bond & put in on the November ballot consisting of intersection projects, parks, trails, and a land bank for future park space acquisition. We have a decade-long backlog of intersection improvement projects. Acquire the cleared & vacant lot on the corner of Mt. Vernon / Chamblee Dwy - to create a welcoming community centerpiece, visually appealing pocket park. More & more. Let’s stop REACTING and be PROACTIVE.

Put a citizen stakeholder committee together to put the bond package together. Make sure 75% of them are under age 50. Or at least 50%. These folks are the future. Include a well-defined & measurable project list, legislative oversight, accountability and transparency into the Bond.

Aside: For those of you who have not been trained or schooled in military tactics & strategy, allow me to provide you a pointer:

No country has EVER won a war by being on the defense. You ONLY win a war by being on the offense. We’re playing reactionary defense. Communities are the same. Be bold. Be strategic. Be visionary. Put the offense back on the field and take action. Paving is “as is” operational maintenance. Paving is reactionary. Paving isn’t why young families or businesses may choose to move to Dunwoody.

3) Put in the low-hanging fruit items like some sand volleyball courts. Focus first on amenities that are used on DAILY basis that activate our parks, instead of "special" periodic events. For an example of a nice stage pavilion, head over to Norcross’ Thrasher Park this Friday at 7:30 pm to see the FAMOUS Ruperts Orchestra for a free concert. Get there EARLY! 4) More BATHROOMS please. Get them installed at Windward Hollow.

5) Trails, Trails and More Trails!! Connecting all points of the compass to our parks, neighborhoods, schools, retail and employment centers. Trails are the NUMBER ONE Park amenity citizens have repeatedly been asking for.

6) Tonight's agenda asks for an extra $500k to be put into the paving budget. Instead, hire at least TWO new staff members -- a) under Community Development to PROACTIVELY look out for our city, to be proactive-vs- reactive in continuing to transition Dunwoody from a 1980’s bedroom community with a mall, to a human-oriented activated community. b) under the City Manager as an Active Transportation Coordinator, building Safe Routes to School programs, encouraging folks of all ages to move around on human-powered means, leaving the motor vehicles at home; reducing cars on our streets. Can also work with Parks and support active PROGRAMING for our residents.